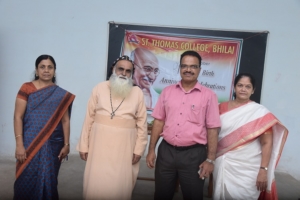 To Celebrate the 150th Birth Anniversary of Mahatma Gandhi, St. Thomas College under the aegis of “ KalaPratibha”  conducted many competitions on Gandhian Principles and his teachings for Modern Indian Society. The most important teachings of Mahatma  was emphasized on “Cleanliness”for which cleanliness Drive was  undertaken by the students  by displaying posters and paintings on the particular topic. Likewise different competitions were held to commemorate the Birth Anniversary of our father of the nation. The competitions were followed by Essay competition, Quiz, One Act Play, Debate and Extempore. The students enthusiastically participated in all the competitions and showed their tribute to the great leader of the Nation. The events were highly applauded by the Management, Principal and other staff members of the College. The Program was successfully conducted under the supervision of Dr. Jayshree Balasubramanian and cultural team.