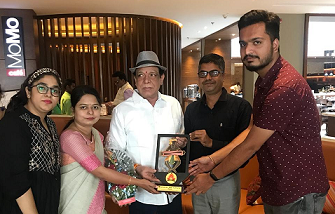 Govind Namdev, a well-known personality in theater and films, interacted with students of journalism

Students of the Department of Journalism and Mass Communication of St. Thomas College, Ruabandha interacted with Govind Namdev, a renowned personality in theater and films. Namdev spoke to the students about their career and goals and shared his experience in theater and film, under the direction of Principal, Dr. MG Roymon and under the guidance of Dr. Aparna Ghosh, Head of Department.

Dr. Aditi Namdev, while welcoming actor Govind Namdev on behalf of the department, highlighted the importance of the event. Muhammad Zakir Hussain from the department gave detailed information to the students on Govind Namdev’s contribution towards films and theater. Starting his conversation, actor Namdev said that journalism is not just a profession but also a huge responsibility towards the society. Therefore, students of journalism should understand the importance and seriousness of the subject. He said that the students should look at the people in top positions of this field and try to understand how they achieved this position and create their plan for their future accordingly.

He said that ‘if any top journalist of the country is getting 21, 25 or 28 lakh rupees a month, then why can’t I get it?’, the students should set their goals with this mindset; and unless you have passion you won’t achieve your goals. When students asked about his opinion on the fairness of today’s media, Govind Namdev said that it is a matter of regret that today there is a lack of fairness in media. Media today has to understand its responsibility and the society should not be hurt for the sake of increasing TRP. He said that it is very important for the media to be fair and honest and therefore, all the students should be thorough of our constitution before starting their career in media and should work accordingly. Actor Govind Namdev also narrated some episodes related to his film career and shared the experience of his days in the National School of Drama (NSD). He also gave the students many tips regarding the selection of subject and institute for post-graduation. In the end, actor Govind Namdev was greeted by a memento on behalf of the college. This dialogue session was conducted by final year student, Saba Khan and the vote of thanks was given by final year student, Vinayak Singh which concluded the session.