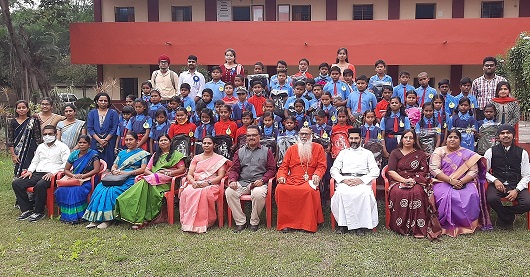 The inaugural function of the “Zeitgeist Forum,” which was organised by the Department of Mathematics and Computers of St. Thomas College, Ruabandha, concluded on Monday, with the chief guest of the programme, Dr. K. V. Rao, Block Education Officer, Durg, praising the programme and highlighting the teachers’ qualities. The Zeitgeist platform hosts a variety of initiatives in which math and computer science students actively participate. The community programme 2021-22 was also launched at this episode, with 51 kids from Government Primary School, Ruabandha, in attendance. School bags, notebooks, and other stationery products were supplied free of charge to the school’s students under this programme.
His Grace Dr. Josep Mar Dinosius, Manager of St. Thomas Mission, who was present at the session, addressed the audience and said that computers are very useful in today’s world, and that he would organise this programme again in the future. Mrs. Sarita Mandre, the primary school’s headmistress, complimented the Department of Mathematics and Computer Science, signed the MoU for inspiring her to live. Fr.Dr. Joshi Varghese, the college’s manager, stated that this is the “Golden Jubilee Celebration” for St. Thomas Mission’s 50th anniversary, and in this episode, he detailed the Golden Jubilee Celebrations programme.
Dr. M.G. Roymon, the college’s principal, who presided over the programme, expressed gratitude to the pupils of Government Primary School Ruabandha for participating in it, as well as the school’s head Mistress. During the programme, books published by Professor Dr. Ujjwala Supe and Dr. Surekha Jawade were released. Dr. Suja Varghese, Head of the Department of Mathematics and Computer Science, greeted all of the attendees and provided information about the programme.
Ms. Preeti Jain, the programme coordinator, and Mr. Netra Kumar Gupta, the program’s executive director, praised everyone for their contributions to the program’s success. Mr. Santosh Miri, Ms. Manju Karunakaran, and Dr. Smita Suresh Daniel, as well as Assistant Professors of the Stage Operations Department, Ms. Jyoti Devangan and Ms. Sheenu Balyan, also Host the whole programme.